This past weekend, Martin and I flew over to the lovely area of Southern France for a friends wedding. We arrived into Marsielle MP2 airport, which is pretty much just for the cheap airlines (such as ryanair) fly into, so everything looked quite budget. Which was in stark contrast to the wonderful surroundings that we drove through on our journey. 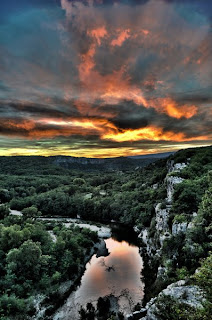 After finally getting through the bad traffic just outside of the airport, we were on our way to Grau du Roi, which is the beach of Le Grau du Roi town. Along the route we saw some very Mediterranean scenery and the best bit, was wild flamingos. The area around Grau du Roi, is full of salt marshes, which is actually where there is quite a bit of salt production occurring and therefore a great area to find the flamingos. We arrived to Grau du Roi, to find a very nice seaside city/town. The sand between my toes felt great, as despite the fact that we live in Southend-on-Sea, we dont have real sand. The water was a let down here, even though it was shallow, it was freezing and very dirty. So we didn't go for a proper swim, just legs wadding through. The sun was really nice, making the sand all warm, so it was hard to leave the beach and head to our next destination of Aigues Mortes. This is a famous entirely walled city, that is still standing from medieval times and looks very impressive. We drove around 1/2 of it and then headed in through one of the narrow gates to the main square. We had hoped to find somewhere to eat but nothing opened before 7:30 and we needed to press on for our hosts that night. Enjoyed a bit of music that was part of the set up for an upcoming concert, and explored the narrow cute streets. On route to Ales (our host city for the night), we stopped at an amazing restaurant just off of the highway called the 3 partridges. The food was AMAZING! Haven't had such varied tastes between courses, and such evident effort put into making the food tasty in a long time. We arrived quite late to our hosts as I didn't expect dinner to take 1.5 hours! But we had a great stay.

Left a bit late the next morning so we enjoy Ales. Got to Joyuese before lunch and explored the town. As it was built on a hill, its medieval design was slightly different then Aigues Mortes, the view from the top was very pretty. Had another fabulous lunch and was quite bloated, as we headed off to get ready for the wedding. As it wasn't my wedding I will let them announce the details of it, but it was a truly wonderful special day, and we were both honored to be included in it.
The next morning we headed off quite early as we had a long drive back for an early afternoon flight. It was an almost straight drive down to the airport, through great scenery that reminded us of Northern Portugal in a way.We did stop at the Pont du Gard, which is the tallest Roman aquaduct left standing intact from Roman times. It was an extremely impressive sight, more so with the weather. As we arrived it was all foggy and mystical, but whilst we were briefly there, the sun came out and blue skies. Quite remarkable the difference it made. Very fast driving down to the airport, and we got on our flight back to England.
at 20:05 No comments: