The day after the wedding: 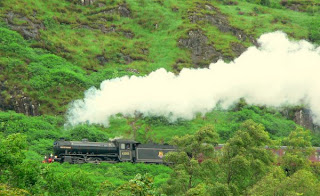 Sadly Geoff, Anne-lore, Jess and Kieran had to head back to their ports of call so they couldn't join us on our day trip. The weather had continued to be bad from the previous day, but we headed out anyway. First stop on the journey was Loch Shiel, more formally know, as Hogwarts Lake. My sneaky plan for the timing worked well and we actually got to see the hogwarts express go along the Harry Potter bridge.
From here we continued on through the Morar region, which is home of Scotland's deepest Loch. Saw the train again throughout the journey to Mallaig (http://www.road-to-the-isles.org.uk/mallaig.html). I was hoping the weather might have been better so we could have see the hills of Skye but this wasn' t the case. Had a very nice lunch just before the train arrived the entire town was full. More photos of the train before heading back. Had a nice afternoon relaxing at the hotel, before we headed off for dinner at a local seafood restaurant Martin and I had found on our last journey here. The seafood was very good, nice and fresh. Everything was either from Loch Leven, or from nearby Lochs, so tasty tasty. A great end to the evening. 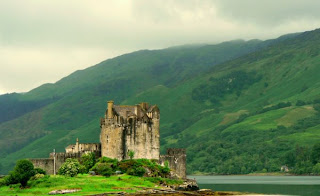 After saying a very sad good bye to our remaining guests and Martins parents, with my family we headed off north towards the Isle of Skye. Our first stop along the road was at Loch Lochy. A very pretty loch even in bad weather. Saw the famous castle of Eilean Donan (see james bond films) on route to Kyle of Lochash. Here we stopped a did a cruise tour on a glass bottom boat. Saw lots of seals (and babies!) and jellyfish. Once back inside of the loch the glass bottom showed a very interesting world of different seaweeds, and crabs.
Once we were back on the way we headed straight to Dunvegan. Arrived early evening, so with Andrew and Dad we did the 1 hour walking trip through the different environments of Dunvegan. The local church has the highest pew in Scotland, after that through the local forest, then up top for a walk along the moors. Here we could see the Dunvegan rock which the locals erected using stone age methods. At the end of the trek was a ruined church which is home of the MacLeods clan and has 7 of the clan chiefs buried there. Was a very interesting site.

Trip to middle of nowhere: 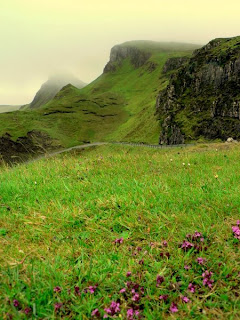 Left early the next day taking the scenic route through the top of Skye. This road is amazing with the low cloud we had it was very pretty and had wild flowers springing up everywhere.Storr is a region of NE Skye that is famous for its dinosaur remains and massive pinnacles of rock (also used in the movie Stardust). Had a nice stop in Portree before carrying on south back over the Skye Bridge. Stopped at one of the few working kilt weavers mill in Lochcarron, where we actually got to see them making kilts. Lots more scenic driving as we headed through the "most scenic mountain route in Scotland" on our way to Camusnagual which is beside Loch Little Broom. Nice hostel here, which had great views of a hillside filled with boulders and the Loch.

Up to Tongue:
First stop was Ullapool. Nice seaside town. We got to see the ferry coming in for the Isle of Lewis and park up, it was interesting as the wind was so strong, and the turn they had take, made the ship go on a very odd lean. Glad my car wasn't on there. Next stop was the ruined MacLeod/Mackintosh castle beside Loch Assynt. Straight onto Durness, where the boys thought it would be good fun to go for a swim. I was kinda keen til the sand started to eat my face, so wasn't going to expose the whole body to that. Durness/Sango beach (http://www.durness.org/Beaches.htm) is supposed to be one of the best in Scotland.

Onto Smoo Cave which has been inhabited for over 1000 years and used for various purposes from living to smelting. Sadly the tour wasn't running this time around either, so still only got to do the first part of the cave. Headed to Tongue and found our B&B for the night. 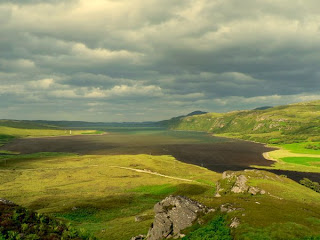 Using the local guide book did an archaeological tour of the area which was quite fascinating. Started off with cup markings, which are like cup holders ground into a boulders - apparently they had religious significance. Then saw the very sparse remains for a highland clearance village. Next was a very impressive Iron Age fort. This was quite an undertaking moving the large quantity of stone so far from source. Then, beside an old highland house ruin, on the foreshore of the Loch Tongue was a Bronze Age long house foundations. Very exciting. And to finish it was was the remains of the old ferry crossing.

Puffins:
Did a day trip out to Dunscanbury Head (near John O'Groats) which was a known Puffin (http://en.wikipedia.org/wiki/Atlantic_Puffin) breeding ground, in the hopes that we would find some, and we did. A single and a pair with their nest =). But that was not at first. We hiked down onto the other cliff area nearby and explored the rocky beach. Saw some seals and hundreds of seagulls that were nesting on the cliffs there. Got absolutely soaked during a downpour just as we found the puffins (which were right by where we parked the car, Murphy's law). Brilliant day. 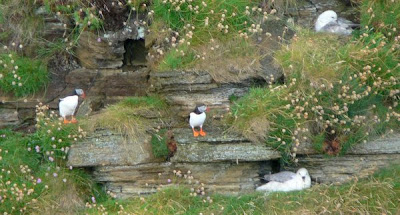 Nessie Hunting:
From Tongue we headed down to Lochend, at the northern tip of Loch Ness and settled for a two day stop. First day we really explored Inverness a bit more. The next day Andrew, Martin and myself headed down to the main harbour of Loch Ness and got ourselves on a proper Nessie tour, lead by an actual Nessie hunter. Didn't see any signs of a dinosaur/monster/thingie, but enjoyed the trip out and meeting someone that had devoted 38 years to hunting for this mysterious/mythical creature. Awesome. Bit more of Inverness that night.

Aberdeen via Pictish Trail:
Along the route from Inverness to Aberdeeen are a great many Pictish ruins. The Picts were a prehistoric society that were one of the founding tribes that combined to form the Scottish People that we know (http://halfmoon.tripod.com/). We stopped in Burgshead which was a massive Picitsh fort (believed to be a Palace) which had a large collection of Pictish stones - which are now in national museum in Edinburgh. Couldn't get
into the well this time as the person wasn't home that has the key. Onto Elgin where we walked around the old cathedral where Pictish stones have been found within the crumbling ruins. Along a different route we saw the Pink pictish stone that was made from pink granite. We arrived into Aberdeen and walked around the city. It was actually quite depressing for me as it was so grey. All the buildings were grey, seriously only signs added colour to the streets.

Edinburgh!:
On route to edinburgh we drove through the scenic Cairngorms National park. Edinburgh is just as interesting as always. It was nice to show the family around, and to be reminded of Dunedin. The castle was all fitted out for the Tattoo event, and the streets swarmed with tourists, which was a huge change from everywhere we had been for the last week or so. Our travelodge was right down town, so the next morning it made it easy to go to the National Museum and have one final wander around town. After Edinburgh it was the sad point of having to say good bye to my parents and brother. We dropped them off at Rosyth harbour as they headed off on their cruise. That night we stayed in Saltburn-by-the-sea, which had a nice pier and is a cute wee town near Whitby.
at 20:27