The thing that most people associate with Turkey, is their capital city; Istanbul. It has quite a lot of offer a tourist however, I still believe that the best places to go are outside of the cities (maybe spend a day or two in a city then move onto the better side of life). 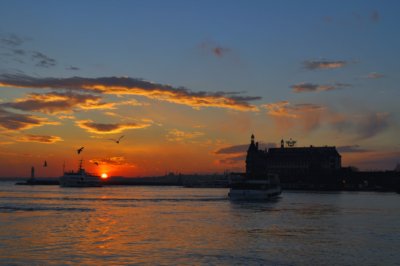 We had 1.6 days in Istanbul. The .6 was due to us flying out early evening to Kayseri (see Cappadocia). During this time we explored the Asian sides area called Kadikoy. Had a very nice lunch here, but its mostly shops. There is a monument to Ataturk here beside the ferry terminal that is quite impressive, especially with its large Turkish flag.

The best mode of trasnport (and for seeing a lot) in Istanbul is the ferries. They are very cheap 1.75TL one way, and get you over vast distances very fast. Istanbul is HUGE. And the amount of traffic can make other modes very slow. The subway is good, however it doesn't tend to go most places.

So we used the ferry to get from Kadikoy to Taksim. The area of Taksim is apparently a must see point of Istanbul, but unless you want blatent globalisation and have a lot of money to shop, during the day this place really isn't that interesting. The main street leading to Taksim sqaure (which we walked down entirely) is only lined with shops, most of which are not Turkish sadly. At night this is supposed to be the place to go to party, but I have no comment on this fact.

Our second time in Istanbul we had a full long day there. Managed to see quite a number of historical sites. The Hagia Sofia (despite being full to the brim with tourists) is a must see purely for the deep history involved. Started as a church/temple built by the romans, then became a church proper, then a mosque and is now a museum. Most interesting point to see is on the 2nd floor the arches towards the alter are literally squashed due to the tremedous pressure from dome. Awesome.

Saw the outside of the blue mosque (sadly it was prayer session when we were there so couldn't go inside). Then headed down to explore the Bazaars that Istanbul has to offer. These are aamazing. The famous large covered one is incredible as to the colours and smeels that assult you as you enter. Not to mention the crush of people. Head to the side streets, much better. Also went to the spice bazaar, which smelling great, but much smaller than the main one. A definite must do of Istanbul.

After having our fill (literally of sites and food) we headed off to the archaeological museum. This was on my list, but Martin enjoyed it as well. There are artefacts there from the Hittite empire right through to the early Ottoman, as well as, a little bit from all the neighbours that influenced Turkeys development. Fascinating times. Also a must see if you have the time and are that way inclined.A side note is just at the end of the gardens that the museum are associated with, is a slightly expensive outdoor tea house, that has incredible views over the Bosphorous.

Our final push for the day (as the sun was setting - so beautiful) we did another ferry crossing (closer to the bridge this time) to get some nice photos and see more of the architecture. Lovely end to daylight and our time in Istanbul.
at 19:33