After flying from Kayseri to Izmir, we drove up to Oren to stay the night. Oren is a lovely sea side town on the way north to Troia, which is near the town Truva in modern Turkey. If we had, had more time Oren is a very pretty place and deserved more exploring. 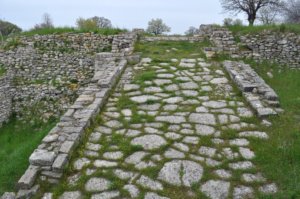 Troia is awesome. It is amazing to see the different levels of civilization so easiliy displayed. There is only particular point where the excavations have stopped at each level providing a very easy to see and demonstrate the history of Troy. The place is quite large (although I was expecting bigger) and what is uncovered is being looked after and shows you what life is like. The ramp up to the temple at the back of the place is very cool. You can even sit on the infamous walls at one point. Ignore the giant horse here its crap (see the one in Canakkale instead its much better and from the movie Troy).

The other reason that we were heading north was to see the Anzac Cove area. As any New Zealander and Australian would know, this place is special in our history as where we formed the ANZAC corps and lost quite badly. It is lovely to see when you arrive the integration with the Turkish loses as well. I was very touched when we met some Turkish people also seeing the area when one of the party (not speaking any English) tried very hard and eventually made it clear to us, that "our" dead are dear to his heart. Very moving.

The actual Anzac cove still has remains from the landing with concrete landing spots being there and the very obvious graves. All over the pennisula are Australia, New Zelanad and Turkish graves, all very well looked after and respected. Each one has its own story and history to it, which is explained on the giant signs carved out of local stone. The Anzac area is a very moving place, and seeing the union between the nations, a heart warming hope for the future, as the words of Ataturk so brilliantly summarise (and are displayed at Anzac Cove):

"THOSE HEROES THAT SHED THEIR BLOOD AND LOST THEIR LIVES ...
YOU ARE NOW LYING IN THE SOIL OF A FRIENDLY COUNTRY.
THEREFORE REST IN PEACE.
THERE IS NO DIFFERENCE BETWEEN THE JOHNNIES
AND THE MEHMETS TO US WHERE THEY LIE SIDE BY SIDE
HERE IN THIS COUNTRY OF OURS ... YOU, THE MOTHERS,
WHO SENT THEIR SONS FROM FAR AWAY COUNTRIES
WIPE AWAY YOUR TEARS;
YOUR SONS ARE NOW LYING IN OUR BOSOMAND ARE IN PEACE
AFTER HAVING LOST THEIR LIVES ON THIS LAND THEY HAVE
BECOME OUR SONS AS WELL."
ATATURK, 1934

This would be the number one must see thing in Turkey, equal to the Cappadocia region. The magnifcience of Pamukkale can never be accurately described. It is amazingly huge and the feeling of it as you walk over the area is awesome. It is amazing how this massive white terrace complex is still around after all this time. As you walk from one area to another, you can actually see how big it used to really be, but without the constant flows from the spring in certain areas they have crumbled away. This is sadly due to humans messing with it (such a shame). As you look down you can mini terraces forming which give your feet a gentle massage as you walk over them, and on the higher up parts much larger terraces. Once again I feel humans have ruined it a bit, as the man made terraces are nowhere near as pretty and detract from the "fairy castle" appearance. But DO GO HERE! 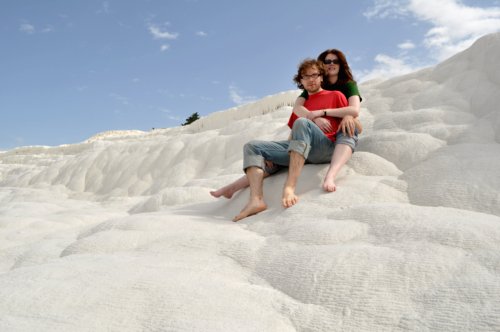 The Greeks were the first to come here and started the amazing city of Hierapolis, a place of healing. The road leading up to the main city is full of tombs of those people that came here to get well, but clearly didn't. The ruins are quite extensive and litter the surrounding countryside. The theatre is very impressuve (although the one at Ephesus is bigger and better) and looking from the top of the theatre onto the site is quite spectacular.

One key tip to remember is to NOT park at the Southern entrance as the parking there is paid. Rather park in the little town near the much smaller northern entrance. This also provides the best route as you walk up fully, around Hierapolis and back down, whereas if you come from the other way the walk down can be off putting as it hurts the ankles (or at least my still recovering one).

Ensure that you have at least 3 hours to properly explore and read everything at Ephesus as its full of history from the Hittite empire onwards. This ancient city is quite amazing mainly due to the the large amount of marble still present decorating not only the buildings but the streets are still paved with marble.

The city seems very crowded with ruins but that is mainly becuase the way in which the crumbled blocks have been displayed. There is a lot of broken pieces of buildings but rather then making it appear tidy, they display everything which can overwhelm the sense a bit.The best part of this city is the library which still has its facade standing at 2 storeys, however the inside at back is missing. The theatre here is quite impressive as well, mainly due to its sheer size. It the biggest theatre I have ever been in.