Our time in inland Croatia, was spread over two days as we did a side step into Bosnia (which I highly recommend you get to!!). We stayed along the coastal route from Omis until Split, then took the motorway inland. The motorways in Croatia are fantastic, well designed and very new (although a bit expensive). The main point of the day was to get to Plitvice Lakes National Park. Here we spent the afternoon walking around observing the park, which was amazing in the wintery glory. The waterfalls were just starting to come back to life, with at least half still frozen, which provided an interesting view of the water running underneath the frozen roof of them. There were also a high number of giant icicles hanging on from the sides of the waterfalls.  The pathways were still frozen or had snow on them which made walking around (especially with crutches) slightly tricky.  This place is definitely a must see in Croatia if you need a break from the amazing scenery on the coast or if you have an extra day to spare. In the summer there, there are also buses and boats going which would help to speed up what you can see in the national park. The water colour that the park is famous for is still present with a lovely mixtures of pure blues and greens, and all the colours in between them. 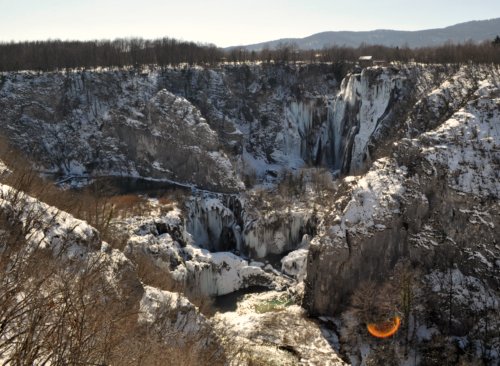 The other part of inland Croatia that we explored was near the Bosnian border and leading up to Hungary. Here there was a lot of evidence of the wars of the past. Pretty much every village we visited, the older houses (or those that had not replastered) had evidence of bullet holes. It is very hard to imagine what it must have been like living in these sort of times, with the constant fear. Apart from the war memories, this part of Croatia, was very similar to other areas of Eastern Europe in house design. Although it appears much sleepier, with older people just sitting beside the road, staring at that weird Czech car driving by, it was very nice.