Unfortunately our plans in Monetenegro  did not go well, due to the fact that it took us much longer to get out of Albania than we had planned. After crossing the border we headed north through a bird sanctuary through to the mountain monastery Ostrog. This place is famous as it is built at the top of, and into the cliff of a very high mountain. The road getting there once off the highway, was a little interesting (sheer drop and single lanes, passing was fun), but once there the view was amazing. Sadly the monastery was not what we had expected, as they have closed off the majority of the place so you can really only appreciate the view and two altars. The higher altar of the two was quite impressive..Using a natural cave the monks/artists have created some extremely beautiful artwork all over the walls. 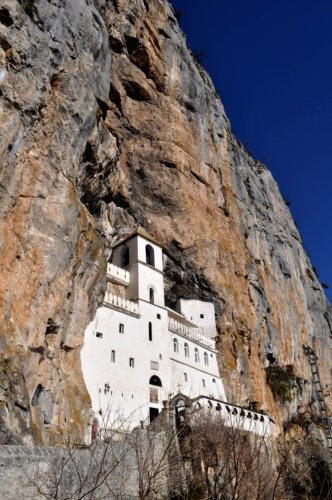 We headed off to what we thought was a slight shortcut rather going all the way back to the coast, only to find out that both the GPS and google maps were extremely confused. What was labeled a highway turned out to be a dirt track. Seriously, a gravel road in NZ would have been better to drive on than this “highway”. So sadly we had to head back all the way we had come and wasted a lot of time. This meant that by the time we got to Kotor, it was dark. Kotor in the dark was still quite an impressive site. Unlike what is shown in the pictures the old town walls actually go up the hill from the old town which is at the base. This provides a very unusual view. Not quite sure why this is happened as there is nothing visible at night, at the top of the hill.

The next morning we explored the area around Herceg Novi, where we had stayed the night. The Bay of Kotor (which we were at the end of), is very pretty. Beaches are quite nice, and the mountains going almost straight into the sea was very cool. We will have to come back sometime and explore Bay of Kotor properly as I feel we missed a lot travelling at night.