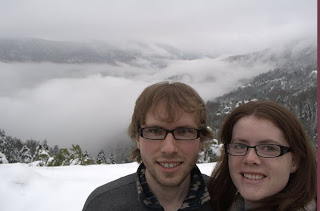 Today started well with weather looking ok, and being a bit warmer. We made good time from Aftios,  through the Greek countryside largely due to the very nicely improved motorways connecting Thessaloniki to Athens. Had a bit of trouble getting off where we wanted, as they had closed it to make another toll booth, but eventually got to the right point. The route we were taking was a lot twistier than expected and we ended up extremely high. The point of this exercise was to take us from the coastal area’s through Mt Olympus foot hills, which we did. However we were not expecting the portions of extremely dense fog (30 m at most) and 40+ cm snow lining the roadside. Not quite sure how another car would have passed us. The view through the gaps in the fog was incredible and there was such peace with the only sound being that of snow falling from the trees. Through these foothills we did not encounter a single car. Had some more interesting scenic driving through a lot more fog, and similar snow, to get from Olympus (the town) to Meteora monasteries, the main point of the day. 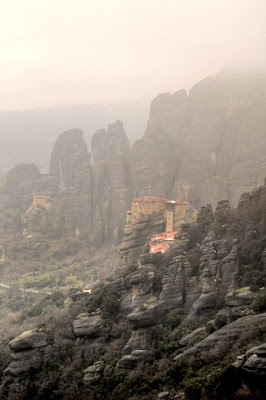 The monasteries are located in an extremely beautiful part of Greece. Here there are massive fingers of rock, gouged out by water, standing over 600m+ up, with monasteries perched precariously on top of them. Sadly we arrived just after closing time for them, but did get to hear the bells ringing with the hour. The building of these places must have been a huge undertaking and the size of them on these obelisks is even more impressive. They are doted about all over these fingers, which were the most amazing part to me. They varying in shape and size, and seeing the way the water has worked and is working on them is amazing. Some are slowing being cut in half and will probably fall impressively at some point. Others have already had sections fall off recently too (judging from the colour differentiation to the rest of them). There are also little holes gouged in the sides which have been used by the locals as houses at some point, and some still have things stored in them. 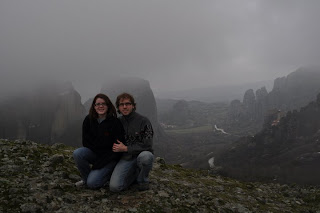 Sadly the fog (there was already some but it wasn’t too bad) that we had driven through made its way to the monasteries, so it was time to move on. We headed onto Ioannina, our camp for the night. The route there would have probably been spectacular as we were clearly driving on a ridge, but of course that nasty fog took away any view, and even made the car in front of us look hazy. Got onto the main motorway, and for the first part fog, but after about 5 mins (and 500m drop in height overall), out we came from a tunnel to find spectacular snowy scenery, with mountains covered brilliantly. Such an impressive site. The building of this motorway was also impressive as we had both never driven through so many continuous tunnels, and each gap between the tunnels was a sight of beauty.

Ioannina is a very nice city. It doesn’t feel to cramped or overcrowded. Has a wonderful lake which reflects the mountains in the morning, similar to that of Queenstown. Here we had a great time going out with our host, and meeting his friends and eating a wide selection of Greek “fast food”, which tasted pretty good. Would definitely recommend it as a place to stay. 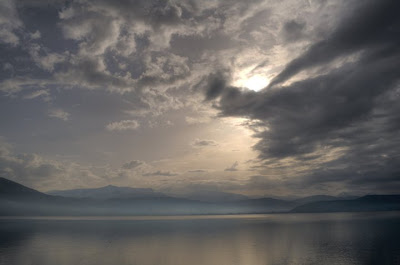