We started our journey into Albania, continuing on from Ioannina Greece. Sadly the Greek part was not as interesting as it had been before, and with the rain was not much fun to look at. There was also the horrible border crossing with hardly any cars, yet took us 1.5 hours to get through the Greek border control (as they only had 1 lane open, and were checking everything).

Albania is a very pretty country and the prettiest part of it is definitely the Southern regions. Here the roads are in much better conditions than the northern part. Although they are only really decent until Vlove, then it turns in to the stereotypical roads that you have probably heard about, where you play, dodge the giant pot hole. The main reason the road is so twisty is that in the south you have to  get along the coastal mountain region. Albania in general has a very large number of mountains, most of which were surprisingly not covered with snow (when compared to the same altitude in Greece there was 30+ cm).


The main point of our excursions into Southern Albania was to see the archaeological site of Butrint. This wonderful little almost island in Butrint lagoon has evidence from every major occupation and development in the Balkan history from Iron age remains through to Ottoman defenses put on at the beginning of this century. The best preserved part of it was the Roman side of the village, although with the water table rising up, it is slowly sinking away. The Venetian tower provides nice views over the surrounding countryside and of course the site itself. This is a must see if you are ever in Albania.

Southern Albania has some of the nicest beaches of white sand we have seen on our trip. The trees are interesting, and the wildlife that likes to go on the road is also fun (though the cows would hurt the car). There really are no words to describe how pretty Southern Albania is, which is why I highly urge you to go there if you ever get the chance. Although in saying this, Albania is not a country that can be done in a hurry at all. We were planning to get much further north then we ended up. We stayed the night in Durres after about 7 hours of driving in Albania only to get about 2/3 through. In easier terms, we drove about 250 km in  7 hours. This is because of the windy roads, and then later on the max speed of 30km because of the terrible condition. 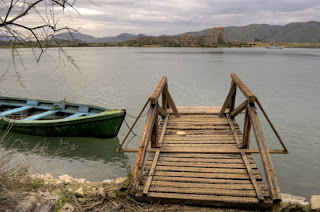 Durres doesn’t have much to say for itself, despite being recommended as a place to go. It does have a good beach which stretches for miles, but after the beautiful coastal regions we had seen elsewhere it seemed almost dirty.
at 19:34